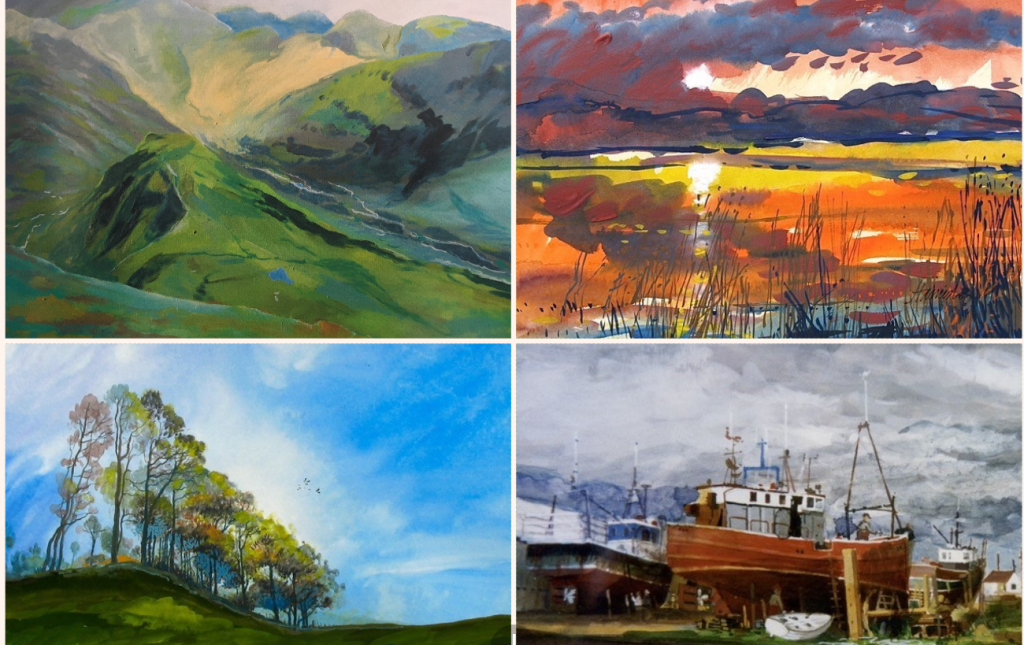 I have always been an admirer of prolific Deaf visual artist Hamish Rosie. In the course of his career he has produced many paintings, architectural drawings, wildlife sketches in oil, gouache, pencils and watercolour.  He has exhibited and sold many of his works worldwide and has produced two hardbacks; ‘My Island: The True Story of a Silent Challenge’ (1999) and ‘My Passion’ (2012).  The first book is about his artistic development and background as a WWII child born in 1940, acquiring profound deafness as a baby after contracting meningitis. His second book is a delightful catalogue print of all of his paintings and the drawing collection accumulated throughout his life.

I have been very lucky to build a personal and ongoing connection with both Hamish and his lovely wife Morag (who is also Deaf) with trips to their Newhaven house with my children for tea. Their lovely, spacious home hosts many of his original works hanging proudly against the clean, white walls which could easily be mistaken for a gallery space.

His impressive artistic portfolio ranges from the detailed calm boats retreating on the harbourside to the daring impressionistic landscapes deftly capturing the wild openness of the lake, sea, mountains and skies in expected colour and inspiring light.   Up by the stairs hang three large squared 750mm x 700mm oil paintings on canvas which look to take a brief turn on an expressionistic style. Using strong dark colours as a base toppled up by quick, sweeping brush strokes which give a sense of hope, darkness and anxiety.  It is an interesting observation emblematic of Hamish’s emotional and a highly physical style of painting.

Perhaps the influence may have come from painting so many dreamy cloudy white skies to the intimidating darkness of the storm, as well as travelling through the intense pink and orange saturated colours seen at dawn and sunsets, bringing the painter’s kinetic brushwork into channelling these emotions elsewhere.

I was very honoured when I could keep and take home one of his large oil painting works entitled “Lake District Landscape in Mist” (below) painted in 2012.  He captured the stunning view first thing in the morning, capturing it in real time with the real canvas and easel set up with him. With his paintbrush he charges the mountains in the background with expressive liveliness that defies their physical structure, while modulating the dreamy blue colour contrast creating an illusion of estimated distance and depth. The calm, cool misty clouds were low on the mountain side, and beneath him is the hazy and vibrant yellow and purple mountain flowers, ferns, heather and mossy green perennials. 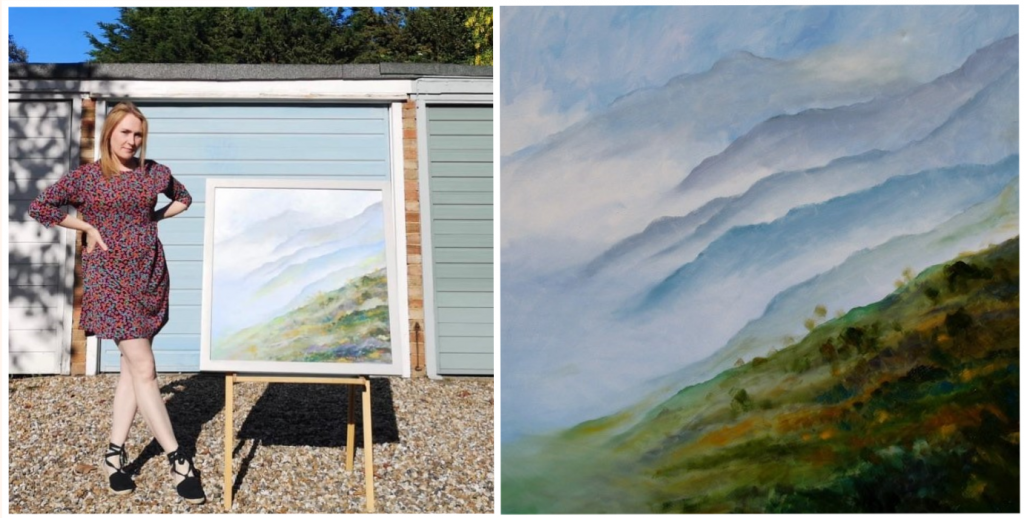 This is clearly an impressionist style of work found in many of Hamish’s paintings. Artists are often more concerned about the light and colour of the moment than with the details of objects they are painting. As he often painted outdoors, he also took and worked on photographs to capture the exact light to work with before it changed.

Hailing from Orkney Island, Hamish is a proud Scotsman. The majestic mountains of Scotland have been an influential factor in his landscape paintings, driving him to explore the various parts of open spaces on his doorstep. This takes me into the subject of impressionism and Scottish music. As well as in Scotland, many different genres of music around the world have used the pentatonic scale as a basis for their melodies (including West African music, Greek traditional music, Chinese music etc). Some composers such as Debussy hone the art of using pentatonic music for creating hazy, and pedalling sound effects – just like the dreamy paintings.  Therefore, pentatonic scales (a note scale sequence of five notes heard in ascending or descending order) are commonly used in Scottish music compositions.  The melodies to the well known Scottish songs ‘Auld Lang Syne’  and ‘Skye Boat Song’  are based around notes taken from the pentatonic scale, creating a sense of sweetness, delicacy, depth and nostalgia.

To pay homage to Hamish, his paintings provide a stunning backdrop to the 2 minute performance of the Skye Boat Song with my old flute students Victoria Goodman and Lottie Anstee and Ludwig Conistabile, a harp player from Milan, Italy who provided a wonderful accompaniment to the flute trio music.

Hamish is now no longer painting large works. He has moved on to producing drawings on the ipad, and has even purchased an expensive printer to print these out to a standard finish.  Inspired by David Hockney, who also was a fellow art student at Kingston School of Art at the same time as him in the late 1950’s, Hamish has also discovered that there are millions of possibilities of doing art on the ipad.  The digital world is exciting and he is constantly working on different densities, wide shades of colour options, splashes of colour, creating chalky, fine lines, blobs and airbrushing.

I think after a lifetime of painting and playing with colours, the digital move makes sense.  He embraces visuality, in his second book he wrote “I frequently travelled home overnight on the sleeper train from London.  Crossing the Forth Bridge, I could always feel the vibrations even though I could not hear, so I would quickly get out of my berth to appreciate the lights of Edinburgh and Queensferry.  It is such a vivid and powerful memory.” For me, the many colour blends and lines often bring to mind the correlation between visual art and music and the many parallels between the two.  There’s the interpretation and expression through the changes in colour, technique, density, structure, shape and so on.

Where music is predominantly a ‘sound-art’ form, the opposite spectrum is silent – a world Hamish and I naturally live by – however a painting can still emit ‘noise’ to us in a visual sense.  While both art forms have their own merits, they are still both borne out of deliberate effort and creative mental process.

Thank you Hamish, for your endless inspiration which will permanently carry me throughout my life.