Ruth Montgomery
She’s been profoundly deaf from birth, but with her knowledge and understanding of music – she has forged a career as a professional musician, teacher, visual artist and creative powerhouse 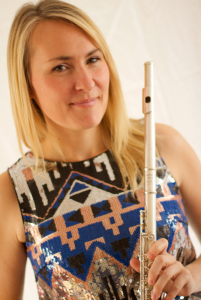 She graduated with a 2.1 Bachelor of Music Honours degree majoring in Flute Performance at the Royal Welsh College of Music and Drama in Cardiff. Unfazed by her deafness, she went on to perform with some of the world’s best orchestras as a soloist playing with the Royal Philharmonic in London at Cadogan Hall, the Russian National Orchestra in Moscow and St Petersburg with the Music of Life Foundation, and with Dame Evelyn Glennie as a guest Soloist. Her musical experiences were filmed and shown on BBC See Hear’s ‘Music Has No Bars’. She also teaches privately, including having worked at Mary Hare Schools as a peripatetic music teacher, as well as facilitating music /arts workshops for the Lyceum Theatre (Lion King), Theatre Royal (Shrek) and the Apollo (Wicked) in London.
BDN: What was it like growing up in a hearing family? When I was growing up, my family never really made much fuss about my deafness and we all carried on with family life as usual. My parents have a huge passion for music. My father is a professional guitarist, composer, director of a Guitar Orchestra and an examiner. My mother used music a lot in her work as a nursery teacher and is a long-time member of a local operatic society. My three hearing brothers and I had private piano lessons.

BDN: Did your family learn BSL?My family did not learn BSL. I am a heavy lip-reader and wear powerful hearing aids. When I was seven years old, I remember struggling to learn and follow anything at primary school due to the lack of deaf awareness. I was the only deaf child there. As a result at 7 and 8 years old I developed a severe skin condition called psoriasis from the stress bottling up inside of me. I missed a lot of days from school. I remember trying my hardest to fit in to playground conversations with hearing children, but it was difficult and I experienced uncomfortable feelings. At the time music brought so much solace and comfort as I was learning the piano on a one-to-one level. I felt like I was given something; I was actually being educated properly! It sapped out isolated feelings. I embraced and appreciated music from that point.

BDN: Did you inherit your talent from your parents?

My parents showed me the world of music and the steps to learning it properly. They had a network of friends who were musicians too. I had a lot of exposure to music at concerts and places and watched professional musicians at work. I remember being in awe with all that artistic creativity coming from musicians and their instruments and liked to watch carefully. I think from that point I developed a good sense of awareness and sensitivity about music performance.

By chance I picked up the flute at the age of 12 at Mary Hare Grammar School for the Deaf – everything snowballed from then.

The music teacher there pretty much led me the way up and encouraged my development.

Having said that, I don’t think my parents realise that they are my mentors too.

BDN: You are a musician, teacher and visual artist – is there one skill that holds particular importance to you?

Reading music. It’s definitely got to be that. I can open up a big book and see lots of music notes and lines and stuff and can understand absolutely everything I see. I have a degree in music and that means being able to understand all that rich and complex theory.

BDN: Which talent comes the most naturally to you?

Flute playing. I just love it. When playing on my flute I can sing, bend, shape, tease, pull back and release sounds as freely as I like within the context of the music. There is so much scope for creativity, ideas and energy.

Outside examiners who assessed my flute performances (often performing big works with a pianist) for my degree and diploma had no idea that I was profoundly deaf.

Not only is the flute a physical act of performing, I wear analogue hearing aids which gives me access to sounds.

I would walk onto the stage and perform for 45 minutes. I didn’t need to speak for they had my recital programme. I would pass with flying colours each time!

I’ve also been incredibly lucky to be taught by many famous flute players and teachers at college, private lessons, at recitals and through flute courses. They taught me so much about interpretation and performing music.

BDN: You’ve had a strong music education – what should teachers do to harness talent in young Deaf children?

It’s not all just about hearing, but the language of music. Along with the other arts, music is an integral part of the history and culture of every civilisation, past and present.

Music is not just found in instrumental playing, but in many other ways too such as dance, performing arts and sign songs. We are all born with capabilities and movements
and, on the whole it’s just like it’s expressive arts.

BDN: You’ve played with some of the best Orchestras in the world – which experience will you never forget?

The Great Hall in Moscow. The Deaf Community Association in Moscow somehow heard about the concert and came along to watch. I had no idea this had happened and at the end they all came to find me. The reception, the praise and hugs I received from them was wonderful. I was also signing a lot of autographs too!

BDN: What was it like performing with Dame Evelyn Glennie?

I enjoyed playing with Evelyn. She was actually my role model when I was a teenager. I didn’t know anyone else as incredible as her at the time.

I looked up to her because she went through that herself. But she was always on the go – she never stopped. With music there’s so much more to do, learn and discover.

BDN: What’s the feeling like of successfully transitioning your students via exams through the Royal School of Music?

Fantastic. I really love my job as a flute teacher. I’ve been doing it for nearly 15 years now. Being able to read and analyse as well as interpret music on the flute is a skill I have passed on and instilled in all of my pupils.

I have a private teaching practice. Nearly all of them started at the beginning with me and have gone on to be very high-level players.

Next month, two of my flute students will go on to study music – one at Oxford University and the other at Chichester. A lot of my students are actively playing in their local youth orchestra, winning prizes in competitions and being invited to public concerts.

BDN: You’ve received countless accolades and awards for your work – what¹s an achievement you’re most proud of?

I enjoy performing and it is nice to be given some recognition. When playing on the stage with the orchestra, I think to myself ‘Bloody hell, did I really do it?’

Looking back it took a lot of guts but I wasn’t scared because I was so secure in my knowledge about the Danzi flute Concerto in Dminor I was performing and just letting my flute sing with the orchestra.

BDN: What’s the best lesson you learnt the hard way?

If there’s a very difficult piece of music that I feel I can’t perform – it’s not the fault of my deafness – I just need to shut up, do more practice and get on with it!

BDN: What’s the best piece of advice you¹ve been given?

When I was 18 and just left Mary Hare and entered one of London’s top music colleges, my flute teacher at the time, Ann Cherry, told me to take risks. The late afternoon sun was shining on her face through the window and she was very direct about it. She knew of my capabilities as a musician and from that point onwards my playing went on to a new level. It was that ‘kick’ and a leap of faith I needed.

BDN: Which Deaf person do you find most inspiring?

I am inspired by my close girlfriends and many other high achievers in the Deaf community whether it is in the arts, acting, teaching, community service and sports. They are passionate about what they do; making positive changes and the goals they strive for in their lives. I get this sense of community pride that lifts me up too.

BDN: What’s your advice to young Deaf people who wish to break into the arts?

Believe in yourself and take risks.

Get the latest news